Lake County needs a new Coroner. Or does it?

In the wake of the various scandals (yes, plural) surrounding the Lake County Coroner's Office, capped off with the resignation of Dr. Richard Keller, Sheriff Mark Curran has been running the office. While I would not suggest that it's fair for Curran to have to be doing two jobs at once, things seem to be going OK.

Apparently, we just can't do with even ONE less elected official in county government (even for a short time), though, as County Board Chairman David Stolman has made his pick (assumedly, really Terry Link's pick) for a replacement coroner: former Waukegan police chief Artis Yancey.

Yancey retired from years of service as a police officer and short stint (18 months) as police chief of Waukegan at just age 51, amid a bit of a scandal of his own that had to do with, shall we say, some domestic entanglements.

While Yancey might look like a good pick for the Dems at first glance -- African-American, law enforcement experience, fairly young, well known in the Waukegan community -- he may also be vulnerable come election time (Nov. 2012) given his personal issues. That is, if he plans to run, which he has, as yet, taken no position on.

So far, two Republicans (that I know of) have expressed interest in running for the Coroner's office.
Posted by Team America at 6:42 AM 7 comments:

Ray True, Chairman of the RALC, made some opening remarks (but left out his usual Reagan jokes, too bad), and noted that for the first time in quite a while the 'top three' Republican groups in Lake County -- the Federation, the RALC and the Central Commitee -- were all working together very well. Dems, you guys better watch out!

The featured speaker was Suzi Schmidt, who gave attendees the scoop on how her transition from County Board Chairman to State Senator has been, and she got wide accolades for refusing to sit in a corner and ask no questions, as freshmen legislators are usually expected to do. Schmidt railed against the governor's borrowing plan and seemed optimsitic that the Republicans would be able to hold together to stop it, since the loss of the Democratic super-majority in the State Senate means that the Dems now need at least one Republican vote. Between Dan Duffy and Suzi Schmidt, they must be wondering what's in the water up here in Lake County, but if our senators have to take the lead in shaking things up, so be it. Now we just have to depose King Terry Link, and we'll be in fine shape.

Here's some pix from the event, with my trusty Blackberry: Circuit Judges Diane Winter and Dan Shanes: 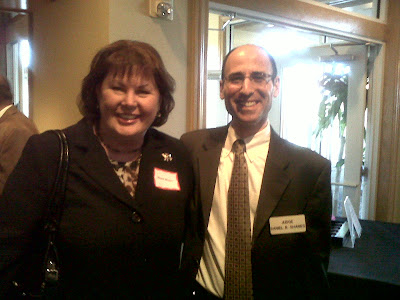 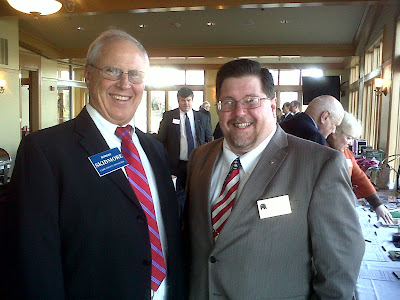 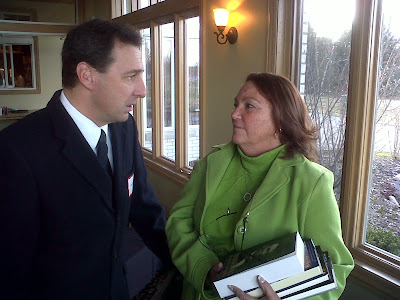 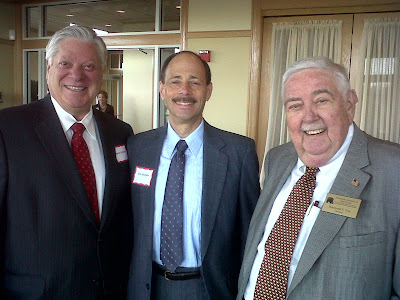 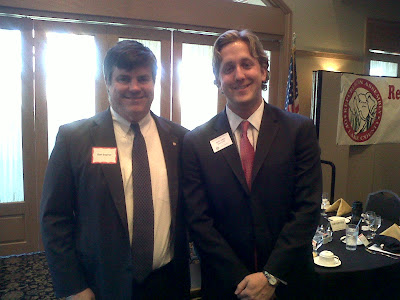 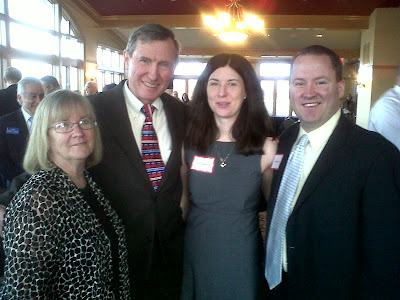 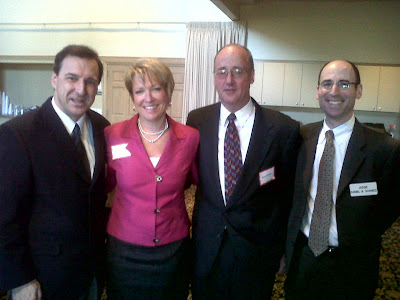 The AP is reporting today that another Illinois business is fleeing Illinois for Wisconsin. I'm sure, of course, that this has nothing at all to do with the business climate here in Illinois. They probably just want to have a better NFL team to root for.

Ditka Update: Yesterday I got a press release that Senator Mark Kirk was hosting Da Legendary Coach Mike Ditka for a lunch with fellow Senators in Washington. Interestingly, Ditka has been mentioned in the past as a possible senate candidate himself.

I didn't mention this yesterday because I didn't want to unnessarily drag up the fact that we here at Team America were instrumental in investigating the 'he said, she said' story of whether Ditka had endorsed one of Kirk's opponents during the primary election. However, Lynn Sweet of the Sun-Times decided to mention that, so here it is. Note that Sweet didn't even bother to name the "rival" who the snafu was all about. So much for that 15 minutes of fame, Mr. Rival.

Anyway, as Sweet points out, it seems Da Coach is clearly pulling for Team Kirk now.


UPDATED: Here is a press release from Senator Mark Kirk on Coach Ditka's visit to DC: 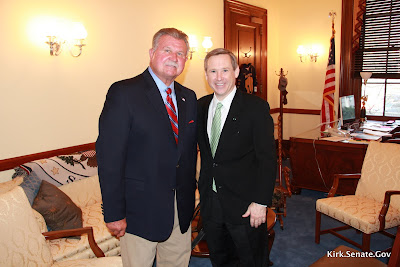 “I am humbled and honored that “Iron Mike” Ditka, a legendary NFL player and coach, would accept my invitation to join our “Thursday Group” luncheon on Capitol Hill. ‘Da Coach’ is someone who set a standard of excellence and determination and achievement that we all strive to achieve every day as we dedicate ourselves to representing the citizens of this great nation.

“In modern Chicago sports history, perhaps one man more than any other symbolizes the “City of Big Shoulders” and its “can-do” spirit.” Mike Ditka not only coached the Chicago Bears to the Super Bowl championship in 1985, but he played tight end for the “Monsters of the Midway” in 1963, which was the last time the Bears had won an NFL championship.”

Early voting for the April general election is already upon us, and the polls are open! Don't everyone run at once, lest you overwhelm the hardworking elections judges, who no doubt expect a huge rush (I was about to say tsunami, but jokes like that just got Gilbert Gottfried fired from his AFLAC gig) at the polling places.

Our friends at the DH just got done looking at the local election scene and wondered why so many local races go uncontested. I think there's probably a lot of reasons -- lack of interest or understanding on the part of citizens about what's at stake and how they can make a difference -- or, on the other hand, some people who HAVE been involved and decided that they'd rather put their time and talent into something else where they really can make a difference. Of course, there's also the issue that many people are so busy trying to make a living to keep the gas tank full (or simply look for a job, for that matter) that volunteering to sit on some board is the last thing on their minds.

We've not really said a lot about local races here recently. Now is the chance for our readers to put their two cents in. Who's on your endorsement list?
Posted by Team America at 7:06 AM 4 comments:

Politico takes a look at the incoming Congressional class and concludes that many of them are filthy rich:

Times are good for the freshman members of Congress.

Like their more senior counterparts, the new members of the 112th session are an exceptionally wealthy bunch. Two-thirds of the Senate freshmen are millionaires, while about 40 percent of the 96 new House members this year are millionaires—according to freshly crunched data from the most recently available financial disclosure reports by the Center for Responsive Politics.

But, newly-minted 8th District Congresman Joe Walsh is far from being a member of that exclusive bunch... and for local constituents, they probably view that as a good thing.

Not every new lawmaker is awash in cash, of course. First time Rep. Joe Walsh of Illinois, one of the few members of his class to deny federal health benefits and go it alone in the individual market, is in debt. He holds negative assets between -$481,994 and -$153,001—making him the least wealthy member of the freshman class.

Walsh told POLITICO last month that the decision to decline federal health benefits would mean paying for a treatment for his wife, who has a preexisting condition, out of pocket. “It’s a cost we will feel, a cost I will have to pick up. I won’t turn down benefits because I have something to fall back on or because I’m independently wealthy,” he said.

So, 8th District voters - which would you rather have? The 'regular' Joe who feels your pain? Or a couple million dollar man or woman trying to understand your views and concerns?
Posted by Team America at 2:29 PM 7 comments:

It looks like Illinois may be closer than ever to finally approving concealed carry. It's now out of committee in the House and may have enough votes (it requires 71) to pass out of the House. Read more here and here. Of course, there are two more hurdles, namely the State Senate and Governor Quinn, who has previously stated he's against concealed carry.

As a gun owner (Lisa Madigan has permission to publish my name if she likes, FOIA or no FOIA) I've always been in favor of concealed carry.... for ME. The rest of you blokes, I'm not so sure about, ha ha.

But I have to say that in large part, I think gun control laws have ended up merely impeding the rights of law-abiding citizens to own guns... while criminals, who don't obey the law, never seem to have much problem getting hold of guns no matter what.

What do y'all think? Will concealed carry finally become law in Illinois?
Posted by Team America at 9:11 PM 8 comments:

Just noticed this on my way out the door this morning - County Board Chairman David Stolman has tapped veteran News-Sun reporter Jim Newton to take Suzi Schmidt's vacancy on the Lake County Board. Schmidt's vacancy was caused, of course, by her State Senate election victory over former Michael Bond. Trib coverage here, Daily Herald coverage here. The full county board will vote on the appointment at its March 15th meeting.
Posted by Team America at 6:55 AM 4 comments:

As we've been following for what seems like years, the scandalous activities associated with the Lake County Coroner's office have finally driven at least one member of the county board to take some action -- Member Aaron Lawlor, a relatively fresh face on the county board, is now calling to eliminate the office of coroner and replace it with an appointed medical examiner under the supervision of the county board. One would hope that this would result in some direct cost savings to the county, as well as providing a greater level of oversight into the operations of the office, since lately there hasn't seem to have been any -- either for the coroner or his deputy.

We'll have to wait and see if others join Lawlor's push to shake up the status quo.

Lawlor presented the proposal to the County Board’s Law and Judicial Committee.

“We have seen scandal after scandal come out of Coroner Keller’s Office,” Lawlor said. “Moving the Coroner to an appointed position dramatically improves budget oversight.”

Under Illinois law, the move to reform the Coroner’s office would require voter approval and would happen after County Board Chairman David Stolman appoints someone to serve out the remainder of Keller’s term.

“Regardless of who replaces Richard Keller, we have to ask ourselves, ‘Why do we really need an elected coroner?’” Lawlor said. “We can serve Lake County better with a professional medical examiner.”

The next possible election to hold a referendum to eliminate the Coroner’s position would be in March 2012.