So Much for Sheyman; It'll Be Schneider vs. Dold in IL-10

Fresh-faced (but possibly too fresh-faced) Ilya Sheyman failed to pull it out over Brad Schneider, in a war to win the hearts and minds of "progressives" in IL-10, with Sheyman conceding to Schneider a short while ago. Watch Schneider lose that claim to be "progressive" in about a milisecond now that he's won the primary, and watch him embrace his "centrist" donations to politicians of both sides, which he spent months trying to explain away. Ah, well, such is politics. Most Dems will likely forgive Schneider, except of course our friend Ellen.

Clearly Schneider presents a tougher threat to Congressman Bob Dold than Sheyman, but from what I hear from my Dem friends, Schneider is a lousy communicator, so he's got some real work to do.

In any event, a few of my favorites won around Lake County - Keith Brin won for Circuit Court Clerk in a tight race against Jerry Dietz, among other interesting races.

One of the more interesting stats, apart from the generally low voter turnout, is that in Lake County at least, there were a TON more people taking GOP ballots than Dem ballots. Yes, obviously the Republicans had a presidential primary on the line that had been getting a lot of press specifically here in Illinois in the days before the election, but the Dems had a hot race in Il-10, too. So, that may bode well for the GOP's chances in Lake County in general this fall, but it's a political eternity until November, so all we can do for now is to stay tuned in...
Posted by Team America at 9:46 PM 26 comments:

Countdown to Illinois Primary with Predictions

Hi everyone - sorry I have been off the grid for the past week - a little thing called work interfered with blogging, but I'm sure we have all been keeping up with the happenings in the Tenth District. So far, though, the not-news appears to be that top Democratic primary opponents Ilya Sheyman and Brad Schneider are taking a lot of pokes at each other. Ho, hum. John Tree's supporters would have us believe that the Democratic voters in IL-10 are so appalled at actual politics that they will turn to him as the only real alternative.

Tree's supporters, such as Ellen of the Tenth, would have us believe that Tree walks on water, and she highly criticizes the other candidates for many reasons, including putting up political signs on public parkways (which she calls "illegal and meaningless"), but I will tell you that I saw plenty of Tree signs up and down Milwaukee Avenue in Vernon Hills on my way back from Pilates early this morning, so don't believe that Tree is some kind of spanky new clean politician. Even Terry "signatures from dead people" Link is crying crocodile tears over the so-called negative campaigning, which is just too funny in itself.

I also have to say I was amused when I got a "breaking news alert" from The Patch over the weekend that retiring State Rep Karen May was supporting Brad Schneider because she didn't like Ilya Sheyman's tactics of pointing out all of Schneider's Republican contributions. Boo hoo. Like anyone care what lame duck Karen May thinks. If you want to complain about tactics, I still think Schneider way crossed the line in putting a picture of the President on one of his walk pieces, which a lot of people seem to agree with.

In any event, here's my prediction for the 10th:

Lake County States's Attorney: Too close to call. Mike Neirheim has won the sign war handily, and Louise Hayes surprisingly went pretty negative on both Bryan Winter and Neirheim. If Hayes hurt Neirheim by going negative but also hurt herself at the same time, maybe Winter pulls it out. This will be a squeeker.

Lake County Recorder of Deeds: This is a bit of a sleeper race in an office that doesn't get much attention. Marty Blumenthal got the newspaper endorsements, but Bob Bednar has a bit more grass roots support, I think, so look for a Bednar win here.

Feel free to add your own predictions in comments.

And, yes, I know Mitt Romney was in town last night, but I could not make it. We had him at the Lake County Republican Federation Fall Dinner in 2010, so I already got my picture with him anyway. ;-) I believe Romney will win Illinois by about 10 points over Rick Santorum.

Adding... I get a personal shout-out from Ellen this morning, in a snarky way, as she relishes the notion of me or any other moderate Republican trying to make the case for Santorum as a great President. I have to say that Santorum scares me a bit, but I'd still take him over Obama-disaster.

Adding more... Over at Talking Points Memo, Ellen is taking a beating in the comments section, with people accusing her of being a Schneider shill. This is almost too funny. So far, she hasn't invited anyone to look at Team America to prove that she's a dyed-in-the-wool liberal and not a blue dog Schneider defender, but if she did, it might set all the moonbats over at TPM right.
Posted by Team America at 8:13 AM 12 comments:

If you are a Democrat, an Obama endorsement is often seen as the Golden Ticket to a win, and people go to sometimes desperate lengths to get it... or at least appear like they have gotten it. IL-10 hopeful Brad Schneider may well have crossed the line, however, in sending out a mailer that prominently displays the picture of the President in the company of other endorsers, such as former Congresswoman Melissa Bean, the Chicago Tribune and the Daily Herald.

Schneider got called out on this by front-running opponent Ilya Sheyman (who recently won a huge victory (73%) in the 10th Dems straw poll this past weekend), and the story has attracted the attention of Huffington Post and Politico. Our friend Ellen of the Tenth, who is a rabid John Tree supporter, had no love for Schneider before this (giving money to Mark Kirk, as has Schneider, is pretty much the kiss of death in her book), and is now just beside herself.

Check out the mailer, below, and decide for yourself. 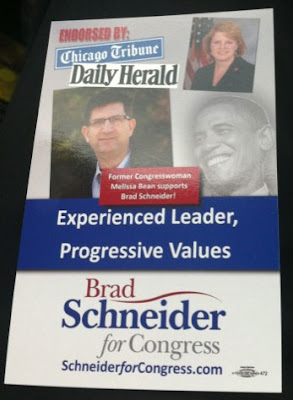 As a bonus, click here to see a 10 minute video of the IL-10 Dem hopefuls on WTTW's Chicago Tonight beating the snot out of each other. Keep at it, boys.

UPDATED 3/9/12 5:00 pm: The Daily Herald, via Russell Lissau, is up with their take on the story. Russell gets a couple of choice quotes from the field:

[John] Tree called Schneider’s use of Obama’s image on the flier “deplorable.”

“This blatant attempt by Brad to inflate his own campaign with misleading and patently false associations should be called out for the shameful act that it was,” Tree said in an email.

[Ilya] Sheyman took a shot at Schneider, too.

“It’s disappointing ... Brad Schneider’s campaign would resort to such desperate tactics to mislead the voters of the 10th District,” Sheyman said in an email.

Also noting.... One of my good Democratic friends attended a Brad Schneider fundraiser at a posh Highland Park home the other night. He thought that Schneider, on the whole, was a much better fit for the district and thought that the issue of his donations to Republicans would be a benefit, IF he can emerge victorious in the primary. But he also said that Schneider was a "terrible communicator" and he needed to learn how to cut it short. Apparently Scheider is in love with the sound of his own voice.

My friend did say that if Sheyman was the nominee, he was voting for Dold. Here's hoping there's a lot more like him out there.
Posted by Team America at 10:14 PM 5 comments:

As we have been reporting lately, the GOP primary battle between Lauren Turelli and Dr. Mark Neerhof has been progressively escalating in the past couple weeks, with Turelli challenging Neerhof's stance on Medicaid and Neerhof's personal interest in protecting such payments (given that Neerhof is a physician), and with Neerhof firing back at Turelli's claimed educational credentials and casting aspersions on Turelli's truthfulness in representing her coursework at the prestigious Cambridge University.

A new piece in The Patch, by one of its editors, is highly critical of Turelli and outlines the Neerhof campaign attack on her credibility. Sometimes when you read a piece like this, you wonder if it is just a plant from the opposing campaign (which kind of pieces The Patch seems to post all the time), but this one is by one of The Patch's editors and seems legit. It appears to be just another case of the Mainstream Media picking up on a story from your own Team America Blog. But since they gave us a link in their story, we could hardly avoid mentioning it, could we?
Posted by Team America at 7:48 AM 2 comments: