A Cure for What Ails the Illinois Republican Party: Guest Editorial

Recently, some of those of us in Illinois have been looking somewhat wistfully across the border to Wisconsin to see how Governor Scott Walker (who was the keynote speaker at the Lake County Republican Federation Spring dinner this past May) is taking his state in a new direction, from both the policy and the political perspectives.  A recent acquaintance of mine, Andrew Welhouse, who moved to Chicago after eight years in the Wisconsin Legislature, including stints with the Assembly Speaker, Senate Majority Leader, and as communication director for the Republican Party of Wisconsin, offered some thoughts and perspective on what the Illinois Republicans need to do to get back on track:

Election Day gives us one of two outcomes: confetti for the winners and questions for the losers.

Republicans in Illinois have seen plenty of both in recent years. But for the good of our country, there’s so much more at stake behind “who won” and “who lost.”

Republicans have pushed for years to call attention to the very real problems threatening our country and future generations. In Washington: massive debt, runaway government and a shaky recovery. In Illinois: a pension crisis and the single worst budget of any state.

And in the fallout of the 2012 elections, we’re left on the “questions” side of the equation.

For example, how did such major Republican issues get pushed to the back burner? How did a $16 trillion debt, a disastrous budget, and a broken status quo somehow become less important than Big Bird and tax returns? How did two wrongheaded comments about abortion by senate candidates mean more than four years of failed leadership by the president?

And all the while, the problems get worse. The deficit keeps growing, the government keeps getting bigger and we lie awake at night worrying about the country our kids will inherit. We said this election is the most important of our lifetimes... 2012 might be nothing compared to what the next generations will face.

We have practical questions too, like what’s next for Joe Walsh? For those of you who don’t know Congressman Walsh, his congressional seat was redistricted out from under him, specifically to elect the challenger who beat him on Tuesday, Tammy Duckworth.

Joe Walsh, as you might know, is one of those rare legislators who votes his conscience and actually put his money where his mouth is. On his own, he turned down his congressional pension and health care benefits, something unheard-of in this day and age. He held more Town Hall meetings than any other member of Congress, and he spoke his mind, even when he knew people didn’t agree with him.

His defeat might have a lesson in it: sometimes it’s more important to speak your mind and be true to what you believe, even if it means losing an election.

There are plenty of lessons to take away from Election Day. First, no matter what the outcome, it’s clear that there’s an appetite in this country for economic freedom. Mitt Romney never would have gotten as close as he did if it weren’t for deep, resonant concerns about the state of our economy.

Second, redistricting played a role. We saw it in Illinois and across the country.
Third, we’re still a center-right country. Even with a second-term President Obama and a Democrat Senate, Republicans still elected 30 governors, the highest total for either party in a decade. The Middle Class doesn’t act as a voting bloc - it’s made up of families like yours and mine, concerned about the next generation.

Fourth, the Republican party has challenges and opportunities in front of it. On the one hand, Obama’s second term finally forces him to close the book on blaming President Bush for every ill, and guilting the rest of the party by association. Paul Ryan’s spot on the ticket reinforced the party’s break with its big-government past, as does its deep bench of young talent like Bobby Jindal, Marco Rubio, Scott Walker, Nikki Haley and Ted Cruz, among others. Compare that to the Democrats’ bench: Hillary Clinton and Joe Biden?

But Fifth, Republicans have reason to worry about their long-term prospects. Nearly every demographic the Democrats carried strongly in in the last two presidential years are growing: Hispanic voters, women voters, urban voters and young voters. The Republican bloc of southern, white, married evangelicals is not a growing base.

But there will always be new rounds of confetti and questions. In two years, Republicans will have another midterm election to fight, on a Senate map of incumbents elected on the 2008 Democrat wave. We’ve got strong, principled candidates who are motivated and eager to out-work the opposition: if someone like Joe Walsh can perform that well in a district specifically drawn to elect his opponent... imagine what he could do statewide?

And perhaps most importantly, we know in our hearts that this country is worth saving. We’re facing big problems: in the short term with the Fiscal Cliff, and in the long term with Big Government and a culture that values entertainment above problem solving.

But America still works best when we focus on our freedoms and opportunities, and the Republican Party still has plenty of both.

If we’re willing to take a hard look at ourselves, and remember that our fight is still worth fighting, our day for confetti will come again soon enough.

I have to admit, I was feeling pretty good last night while making the rounds of the election night parties, that is, until the Early Vote totals got dumped in at the end on the Lake County Clerk's website.  I guess I won't complain anymore that Willard has taken all the suspense out of election night since she gets the vote totals in so soon.  I guess since there is now so much early voting, nothing is for sure until we see the whole enchilada.

In any event, it wasn't all bad -- the Lake County Board is solidly Republican, although David Barkhausen's loss was a little unexpected.  Also, Joe Neal's loss to Melinda Bush was a tough one.  Add in Friedman losing to Morrison, Mathias losing to Sente, and Cole losing to Yingling, it all contributes to what is now a veto-proof majority for the Dems in both the state House and Senate.  Well, Illinois, if you liked the direction the state was headed before, you're going to LOVE it now.  Thanks, folks.

On the bright side, Mike Nerheim won State's Attorney, and Keith Brin won Circuit Court Clerk; Mary Ellen Vanderventer's win over Bob Bednar was no surprise, but I really thought that Steve Newton was going to prevail over Dem Thomas Rudd for Coroner.

Don Castella got crushed by Terry Link, but I really respect Don for giving it a go and hanging in there.  I've been resigned to the fact that we're not going to defeat Link in that district ever since Keith Gray failed to pull it off in the face of Link's massive petition scandal a few years back.

My friend Dan Shanes won for Circuit Judge, as did Tom Schippers.  Pat Fix won over Lou Berrones in a squeaker.

And, of course, the biggest tragedy (besides the Presidential race, of course), is that Congressman Bob Dold was narrowly defeated by lackluster candidate Brad Schneider.  That guy better have a bang-up freshman year or he's going to get crushed in the next primary by any other Dem with a pulse.

This will be the first time since this Tenth District Blog's inception that we do not have a Republican leading the 10th District.  But, hey, Ellen persevered for years as an opposition watchdog, so that's the role I guess we will have to assume here.

Of course, now that the election has been over for all of 12 or 14 hours, it's now time to look ahead to 2014, and see how the Illinois Governor and Durbin senate seat races are going to evolve.

Once more unto the breach, dear friends, once more...
Posted by Team America at 8:47 AM 7 comments:

Voting Open in Lake County Amid a Sea of GOP Signs - And a Sighting of the Dold Bus!

I voted this morning at Lamb's Farm in Libertyville, and while I knew that the enthusiasm of Lake County Republicans was up, and the Dems seemed a bit down, I was not prepared to see a veritable sea of GOP election signs, but not ONE Dem sign.  Wow. 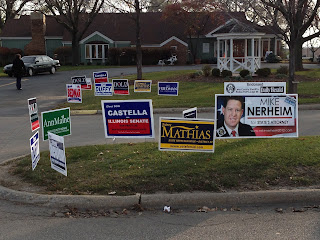 And to top it all off, on the way home, I drove by the DOLD BUS and the NERHEIM FIRETRUCK!  I waved and honked my horn, and was rewarded with a horn blast from the bus and the truck, which was packed with supporters.

I think it's going to be a good day.

I got a tip from long-time TA fan and zealous Mark Kirk supporter "B&B Mom" that Mary Ann Ahern has an exclusive interview that will air this evening.  I will post the exact time when I get it.  Meanwhile, check out the NBC-5 blog post here.

Kirk watchers will note that he has done several endorsement videos for Congresscritters Bob Dold and Judy Biggert, so it seems like Kirk is gearing up to come roaring back to the U.S. Senate, which will be a welcome development.  We need Mark Kirk back on the job now more than ever.