From the Illinois Republican Party....


CHICAGO – Democrat Brad Schneider running in Illinois’ 10th Congressional District, supports raising taxes $2.5 billion in his district alone with the elimination of the 2001 & 2003 and payroll tax cuts at the end of this year.

This week, the Heritage Foundation released statistics on the additional burden the expiration of the current tax cuts would have on Illinois.  According to the group’s calculations, beginning Jan. 1, 2013 the 10th District’s taxes would more than double for families, totaling more than $7,605 per return.

“Now is not the time to be adding to the financial saddle already weighing down local families and businesses,” said Illinois Republican Party Chairman Pat Brady.  “Brad Schneider foolishly believes triggering the largest tax increase in history is a good idea for not only the residents of the 10th District, but for all Americans.  We don’t need Springfield policies in Washington, and that’s what Brad is purposing we do.”

“The fact is uncertainty due to this added taxation has inhibited businesses from hiring, which has restricted families for being able to plan for their futures effectively, and flawed policy stances held by candidates like Brad Schneider are exactly why we need fiscally responsible leaders in office,” added Brady.

Where Schneider Stands on Taxation:

•         Schneider believes in the philosophy of wealth redistribution and his answer to improving the tax code is to create a “progressive tax” system rather than broad-based personal and corporate tax reforms that reduce the burdens on the few and ensure all Americans have a stake in the country.  (source: Glencoe News)


I got an advanced copy of this press release that is going out tomorrow from the Arie Friedman for State Senate campaign:


Friedman’s opponent questions the relevance of his military service

“By questioning the relevance of my experience Mrs. Morrison displays an unfortunate naiveté about the nature of military service,” said Friedman. “Only a full-time career politician would believe that a retired Desert Storm Naval Aviator has never held a position of public trust and accountability.”

During his active duty Naval Aviation career, Dr. Friedman logged thousands of hours and hundreds of shipboard landings as a helicopter pilot and deployed twice including once to Operation Desert Storm.

Morrison went on to tout her experience as a career politician. “I know what it’s like to be accountable to taxpayers and my opponent does not. I know how to balance a budget.”

Dr. Friedman stated in response, “I think Mrs. Morrison has an odd way of demonstrating her belief that she is accountable to the voters. Over a period of several months, Mrs. Morrison has refused to take a position on whether she would have supported last year’s record-setting Illinois state income tax increases.”

“A few months ago we released a video of my opponent repeatedly refusing to take a position on the tax increase,” said Friedman. “How can you be accountable to taxpayers if you refuse to tell them where you stand on the issues?”

According to her own 2011 - 2012 budget, Mrs. Morrison’s West Deerfield Township spent $1.6 million dollars despite only receiving $1 million in revenue. As a result of this, the township’s reserves were drastically depleted. Friedman commented, “If I ran my medical practice that way, my doors would be closed within a month. Illinois can’t afford any more of this Rod Blagojevich style math.”

The video “Julie on Taxes” can be found at this link.

I heard about this over the weekend, but I've been waiting to post something until Lauren was ready to deal with the press.  Unfortunately, Lauren Turelli has decided to drop out of the race to succeed retiring State Representative Karen May.  Her opponent, Democrat Scott Drury, a former assistant U.S. Attorney (and who abandoned the crowded Lake County State's Attorney Dem primary to jump in this race), would have had a tough time with Turelli, but now he's looking a lot better.

No word yet on who the GOP might name to take Turelli's place.  Since the 58th District straddles the Lake-Cook county line, both Lake County GOP Chairman Bob Cook, and several Cook County Township chairmen will have a say in naming Turelli's replacement.  Aside from Keith Gray, who stepped aside from the race when Turelli announced, and of course, Dr. Mark Neerhof, who lost a fairly close primary race to Turelli, I can't immediately think of any likely candidates.

Here's the release, which will be sent out later today to the media outlets:

LAKE FOREST – Lauren Turelli, the Republican nominee for the office of State Representative for the 58th District, today announced that she was ending her campaign.

“It is with much regret that I end my campaign for State Representative. It was a difficult decision to throw my hat in the ring three years ago and even more difficult to leave it behind,”said Turelli. “For nearly three years, I have met with voters throughout the 58th district and created a platform to reform our pension system, to reduce our state budget, to improve public education and to create a business friendly environment in our state. I hope that the Republican Party chooses a like-minded person to replace me for the November election.”

“It is clear that Illinois is in a very precarious financial situation, brought upon by years of abuse and inaction. We require new faces in Springfield without ties to the entrenched interests that control state government in order to repair the damage that has been done,” said Turelli. “While I believe that I have the right vision to reform state government, my personal circumstances have changed since the March primary. I would not be able to devote 100% of my time and energy to this race, which the Republican Party and my supporters expect and deserve. I will not put a Republican victory in jeopardy due to my personal situation and the resulting time constraints.”

The Illinois Election Code requires the political party nominating a candidate for state office to convene a legislative committee to choose the replacement for a candidate who withdraws from a general election contest prior to election day. For the 58th District, that would include the Chairmen of the Cook County Township Republican Organizations within the district and the Lake County Republican Party Chairman.

Turelli committed to assisting the candidate chosen by the Republican Party as much as possible. “From experience, I know what is necessary to run a campaign in this district. I am confident our Republican leaders will choose a qualified individual whom we can all support. I am extremely grateful to all of those who have voted for me and supported me in the past, those who have welcomed me into their homes and businesses, and the wonderful members of our community who have volunteered on my behalf to create a better Illinois.”
Posted by Team America at 11:17 AM 14 comments:

UPDATE 6/5/12 9:25 pm CDT:  The networks are now calling the race in favor of Governor Scott Walker.  There appear to be a lot of votes left to count, but what the heck.  Congrats, guv!

It's hard to ignore the significance of the recall election going on today in Wisconsin, as big labor's efforts to oust Governor Scott Walker in retaliation for his hard-hitting labor reforms are coming to a head.  The national media is presenting this as a pre-referendum on the November presidential election, and on some levels they may be right.  Obama himself has stayed noticeably distant from the battle (even while fundraising in Chicago and in Minnesota), which seems like a good indication to me that he's very concerned that Walker will not be recalled, and a too-close association with this losing effort could prove to be mud that won't wash off as we hurtle towards the November presidential election. 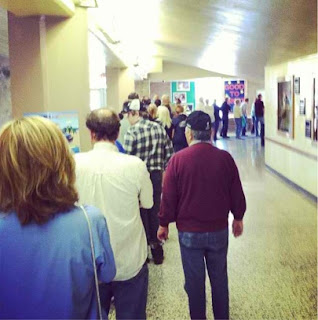 A long line itself is, of course, no indication of how the vote is going to go, but most late polls still had Walker ahead of his opponent, the Milwaukee Mayor, and on my weekend camping trip up to Wilmot, WI, your Team America noted about a 10:1 ratio of pro- versus anti- Walker signs along the road.

TA's prediction:  Walker lives to fight on, and becomes a national GOP hero.