Lake County Board Chairman David Stolman needs to find the county a new coroner (sadly, needs to be a Dem according the rules) in the wake of the disgraceful conduct and subsequent resignation of Dr. Richard Keller. But in the meantime, Sheriff Mark Curran has been dispatched to run the coroner's office in the meantime, and he's finding evidence of much mismanagement and other problems under Keller's watch. The Daily Herald reports here:

Among the problems already identified, Curran said he has found drugs seized by deputy coroners during death investigations that were kept “in what is basically a big garbage can” with little or no documentation of their source.

He said he ordered his officers to bring that evidence to the sheriff's office where it will be inventoried and re-documented to the best of their ability.

Coroner's office employees will be trained on the inventory system and will be expected to continue it, Curran said.

He said he also will instruct coroner's office employees to follow established guidelines for regular destruction of evidence from closed death investigations that have apparently been ignored for some time.

Swell. It's a shame that we have to put ANOTHER Dem in Keller's place. One suggestion I read online somewhere on this issue noted that if the rule said that in such circumstances the replacement official has to be appointed by the OTHER party, maybe that'd provide a bit more incentive for elected officials to mind their Ps and Qs. Here, here.

Democrat Removed From Ballot: In other local news, the former opponent of State's Attorney Michael Waller, one Michael Jacobs, got kicked off the ballot from his Gurnee Trustee's race for failure to pay fines related to his last election campaign. What a nitwit.
Posted by Team America at 9:29 AM 5 comments:

A Sad End to the Tenure of Democrat Dr. Richard Keller as Lake County Coroner

In the culmination of an investigation that has lasted for many months, Dr. Richard Keller, Lake County Coroner, has resigned his office and pleaded guilty to two felony charges related to the death of a 30-year-old man, Stephen Vaughn, in relation to an overdose caused by medication prescribed by Dr. Keller in his capacity as the head of the Green Dragonfly Methadone clinic.

As Team America readers know, we've been following this story for months, from the first hint of trouble at the Green Dragonfly to the announcement from Dr. Keller that he would not seek re-election as coroner (obviously a desperate attempt to deflect the heat of the investigation), to his resignation as the clinic director and closing of the clinic, to the tightening of the noose of the investigation. We suspected it was only a matter of time.

Terry Link, Lake County Democratic Chairman, will likely be the one to make the recommendation of a temporary replacement to be appointed by the Lake County Board Chairman, David Stolman, with the advice and consent of the Lake County Board (since the replacement must be a Democrat). Maybe since his wife Susan Link was crushed in her primary bid for election as a Waukegan Alderman (against long-time incumbent Larry TenPas), she would be a likely candidate. Such a move would be utterly typical for Lake County Dems. Aren't we all so lucky to have these folks in positions of trust and power?
Posted by Team America at 9:12 PM 26 comments: 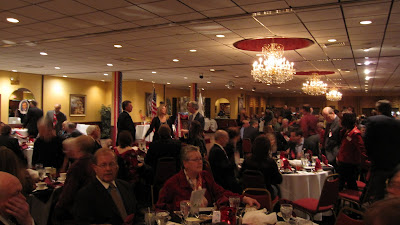 The attendance last night and the enthusiasm in the room was evidence of the renewed vigor that Republicans in all areas of Lake County seem to be enjoying nowadays as we are still basking in the many successes of last year's elections. That enthusiasm is especially evident in the part of western Lake County that falls within the Eighth Congressional District, which elected Joe Walsh to congress over entrenched Democrat Melissa Bean. The local GOP is still reveling in that victory, while the state party is still somewhat in shock (as State GOP Chairman Pat Brady candidly admitted last week at the big Reagan's Birthday celebration, the state party did nothing to help Walsh, but they'll take his victory). We are well-advised to enjoy our little honeymoon period now before the remap follies begin, and I spent considerable time last night talking with political and communications consultant Collin Corbett about the likely remap scenarios as they would affect congressional and local maps/races.

Walsh was not the keynote speaker last night, but his enthusiasm and earnestness seems to fill the room wherever he goes. I spoke with him for a bit and he ribbed me gently for not updating my posts here at Team America more often, so I promise to get back with the program, Congressman ! ;-)

I did mention to Joe that I thought the latest row over him choosing to sleep in his office, but being criticised for potentially improperly failing to account for such use for tax purposes, was ridiculous. A practice that has been followed by Democrats as well as Republicans, which is now being floated as an issue by some, is a measure of austerity that the county ought to be lauding, instead of criticising. I did suggest to Joe that a camp cot instead of the office couch might be more comfortable, though.

The keynote speaker was Illinois National Republican Committeeman Rich Williamson, who gave a great speech that touched heavily on his experience in Ronald Reagan's campaign for the presidency and the Reagan White House (since, even though this was the Lincoln Day dinner, Williamson knew Reagan personally, but obviously didn't know Lincoln, ha-ha.). The crowd, being strong Reagan fans, ate it up.

I did remember my camera this time, but then the battery pack ran out just before the program started (D'Oh!). So here's what I got:


Congressman Joe Walsh with a constituent: 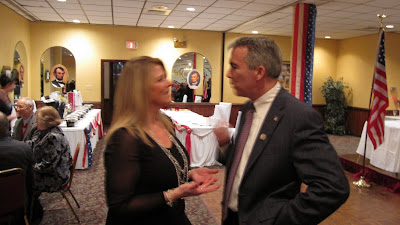 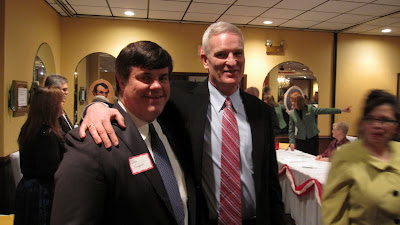 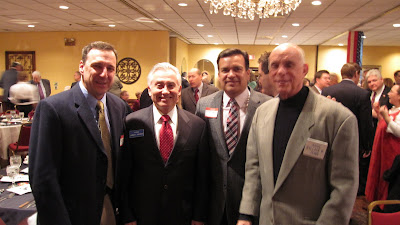 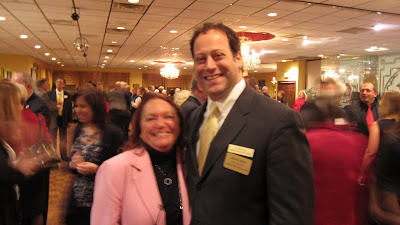 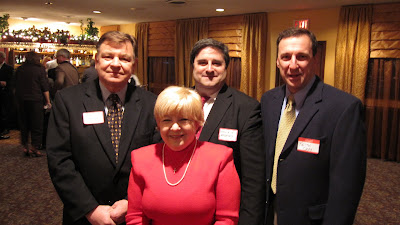 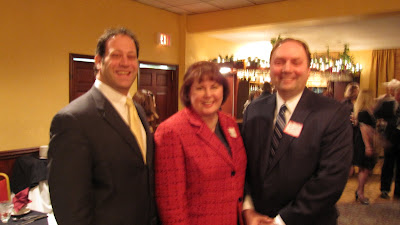 I didn't win any raffle prizes this year unlike at last year's dinner, but I had a lot of fun. Kudos to Nancy and the Grant Township Republican Club for another great event!

UPDATED: I was rushing this morning to post before I ran out to Pilates class, but I wanted to mention that I ran into fellow Blogger Paul Mitchell (Thoughts of a Regular Guy) last night and we joked about forming a Lake County Bloggers' Guild. Paul and I worked together on Dan Sugrue's state representative campaign, and lately he's been closely following the ridiculous SB 136 proposal that seeks to bring home schooled children in Illinois into the jurisdiction of the state. Yeah, great, because they do such a fabulous job overall with the education of our children? If you want to see a classic bureaucratic power grab in action, check out Paul's in-depth series on this issue.
Posted by Team America at 7:40 AM 6 comments: 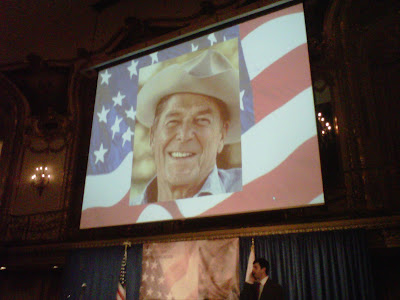 Last night, I was proud to attend the Illinois Republican Party's celebration of what would have been Ronald Wilson Reagan's 100th Birthday. The event was held at the Chicago Hilton Hotel & Towers, a great venue, and the place was packed. I have no idea what the official attendance figures were, but I would guess easily over 700. I'll see if I can get the official total from Mike Morgan and Barret Kedzior, who orchestrated the event (great job guys!).

I managed to forget my camera in all the excitment of getting ready, of course, so even though I was invited to the media availability as a blogger, all I had was my trusty Blackberry. I still managed to snap a few pix. I got some video too, but the room was loud, so I'm just going to post the pictures I got of Senator Mark Kirk and former House Speaker Newt Gingrich as they answered questions for the press. 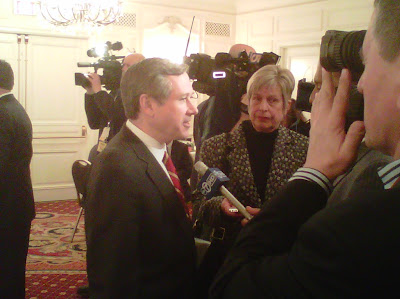 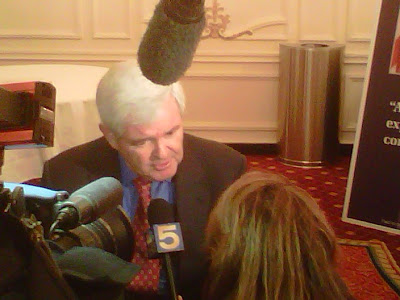 The evening, while long, was a great experience, and we heard numerous speeches from the likes of IL GOP Chairman Pat Brady, Senator Mark Kirk, Newt Gingrich, Congressman Mike Pence of Indiana, Senator Rick Santorum of Pennsylvania (obviously a Steelers fan), former U.S. Ambassador to the United Nations John Bolton, and closing remarks by State Treasurer Dan Rutherford, who was the Illinois executive director for Ronald Reagan's presidential campaign in 1980. There was also a great video review that was presented by WGN radio personalities Don Wade and Roma.

There were several reoccurring themes among all the speakers as they spoke of Ronald Reagan - his humor, his charisma, his ability to communicate. But what really was the most powerful observation about Reagan, perhaps in contrast to the current occupant of the White House, is that Reagan truly believed in the strength and vitality of the American People. He never wavered for a moment in his belief that the government which governed least was best, that government needed to get out of the way of the American people to let them survive, thrive and innovate on their own, and that government was the problem, not the solution. The notion of "American Exceptionalism" came up time and again, and we all know that Reagan truly believed that America was indeed exception among the countries of the world, in a way that many liberals don't seem to understand or simply flatly reject. Reagan always wanted to tell the truth to the American people and was never afraid to identify and call out "evil" where he saw it. Try doing that nowadays, for fear of "offending" some one or some group.

Based on the sentiment in the room last night, I think the American people may have had just about enough of being told recently that they are simply one more country on the list in the United Nations roll call, and have no business "interfering" in the affairs of other countries. If the U.S. does not act firmly and swiftly to protect its interests against the growing threat of extremism and nuclear-ambitious powers like Iran, exactly what multilateral negotiating force is going to protect our children and our childrens' children from waking up someday to a horrifying and even more dangerous world than we have today? Reagan firmly believed that our national security interests gave us a say in the affairs of such countries when their actions and aims threatened us. His worldview, criticized by many at the time as patronizingly simplistic, was "we win, they lose." He was talking about the Soviet Union at the time, but we've lost a lot of the legacy that Ronald Reagan tried to leave us when he strove to protect our country and wasn't afraid to call out those nations and peoples that were seeking to harm us. Liberals nowadays shy away from even thinking about "we" and "they" -- no, too exclusive, too confrontational, not inclusive. Poppycock.

Anyway, there was a lot of those kinds of observations being made last night, as well as lots of quotes from President Reagan, who had a wonderful sense of humor, as many of us remember.

Of course, there were lots and lots of elected officials and other political folks -- way too many to list, but I did see and speak to Mark Kirk, Bob Dold, Joe Walsh, Dan Rutherford, Bill Brady, Matt Murphy and many others. Keith Gray and Dan Sugrue sat with me at dinner and we had a fabulous time.

Here and here are a few other reports from other bloggers who also attended. All in all, a great event, and a wonderful tribute to one of the greatest Presidents our nation has ever known.