What to Do About Dee Beaubien?

As TA readers know, we were one of the first sources to report that Dee Beaubien, widow of former State Representative Mark Beaubien, was considering a run as an independent in the 52nd State Legislative District. This all developed in the wake of conservative David McSweeney's emphatic primary victory over Kent Gaffney, who was appointed to serve out the remainder of Mark Beaubien's term after his untimely death last summer.

Dee Beaubien's decision to run has placed many local Republicans, both within and without the 52nd District, in a bit of a quandary. Dee and her husband had lots of friends and supporters, some of whom are now being torn between their instincts to support the official GOP nominee, and their personal feelings towards Dee. For the conservative members of the district, it's a no-brainer: McSweeney was always their guy. But for folks who supported Gaffney and/or are Beaubien fans, it places them in an uncomfortable position, perhaps.

Significantly, House Minority Leader Tom Cross and other establishment Republicans such as Ed Sullivan, Jr., have already pledged their support to McSweeney (despite their support of Gaffney in the primary). It remains to be seen where other prominent Republicans line up, but I will say that the field of GOP supporters who showed up to Dee Beaubien's campaign announcement was remarkably thin.

One thing that Beaubien will probably not lack is funding, as she is the chosen candidate of Personal PAC.

All I can say at this time is, stay tuned for further developments....
Posted by Team America at 3:07 PM 6 comments: 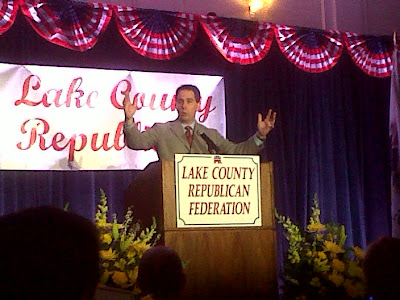 No, Governor Scott Walker is not trying to measure the size of the Illinois budget deficit in this picture, but he drew, indirectly, a stark contrast between where Illinois is headed, and where he has tried to lead Wisconsin, last night as the keynote speaker at the Lake County Republican Federation Spring Gala.

Governor Walker spoke to the sold-out crowd of more than 600 Lake County Republicans in what was the most well-attended and enthusiastic gathering in recent memory. The protesters outside the Marriott Lincolnshire only added to the spice of the occasion, according to everyone inside the event that I spoke to.

As most of you know, as the Dinner Chairman, I had the responsibility for choosing the more mundane items like the appetizers and dinner selections, but also the security measures, and I am proud to report that we held the Hessians at the gate and no breach of the perimeter occurred. ;-)

Governor Walker was clearly the highlight of the evening, as he spoke of how, under his administration, private sector jobs have been created, property taxes have been reduced, and the reforms to union control have resulted in a better way of life for the people of his state.

But, not to be overshadowed, the Federation was also celebrating the 50th Anniversary of the organization, which is an amazing accomplishment -- one that I am proud to have been a small part of. The evening featured a commemorative video, focusing on the history of the Federation, and its co-founder, Ambassador Bob Stuart, who was present and is also celebrating a remarkable 96th birthday this week. We also had a very amusing "congratulatory" video of many prominent Lake County Republicans to wind up the evening. Long-time volunteer and true Republican worker-bee Ray Card stole the entire video with his concluding "blooper" segment. If I can post that sometime soon, I will.

All in all, a really great evening, and one that signifies that no one holds a candle to the strength of the Republican Party in Lake County!
Posted by Team America at 4:31 PM 12 comments:

My early report from the Lake County Republican Convention (which just wrapped up a little bit ago) is that current Chairman Bob Cook has won re-election over his opponent, Moraine Township GOP Chairman Lou Atsaves, by an unofficial vote total of 24,619 to 6,733. I understand that officially, though, Lou threw his votes over to Bob for a unanimous decision.

I think the Lake County Republicans were very fortunate to have two great candidates to chose from, and as far as I have heard, the contest was very honorable and professional, so I have no doubt that the Lake County GOP is going to emerge from the election stronger than ever, and ready to take on the Dems.

In other news... The Daily Herald reports that Congressman Bob Dold had a great fundraising quarter, taking in almost $600,000 (of which almost $400,000 was just in March), which brings him up to about $1.6 million in the bank -- a seven-fold cash advantage over Dem nominee Brad Schneider, who had to compete in an expensive Dem primary.

UPDATED 4/19/12 11:00 am: The Daily Herald reports here. On the Dem side, Chairman Terry Link retains his position, big shock. Once again, the Lake County Dems get the leadership they deserve.
Posted by Team America at 8:36 PM 12 comments:

As we mentioned yesterday, Buffalo Grove Mayor and judicial candidate Jeffrey Braiman seems to be having a bit of a struggle lately controlling the flow of his Village Board meetings with respect to handling public comments. Mayor Braiman has now announced some new measures designed to ensure that no one "hijacks" the meeting, as occurred recently when former trustee Lisa Stone got hold of the microphone. One might wonder how successfully a Judge Braiman would handle court decorum....
Posted by Team America at 7:03 AM No comments:

Hi everyone - my apologies for being "off the grid" as of late, but I just finished a major round of briefing for a case, and now I am able to get back to politics a bit better.

First up in today's news is my friend Judge Daniel Shanes, who addressed the Buffalo Grove Chamber of Commerce recently at a luncheon to talk about the Lake County Judicial System. This was not a political speech, but Team America hears that Shanes' opponent, Buffalo Grove Mayor Jeffrey Braiman, objected to Shanes speaking, but to no avail. Looks like Braiman has his hands full trying to manage former trustee Lisa Stone at the most recent Village Board meeting, so maybe Mayor Braiman ought to concentrate on serving his constituency, rather than being Terry's Link's surrogate in a judicial sub-circuit race.

Meanwhile, the Lake County Republican Federation will be celebrating its 50th Anniversary this week with its annual Spring Gala at the Marriott Lincolnshire. The dinner will feature keynote speaker Governor Scott Walker, who has quite a following among Illinois Republicans. Ticket sales will only be open through Tuesday at the latest, and we already have more than 600 confirmed attendees, so this will be quite an event.

What else is going on out there?
Posted by Team America at 7:35 AM 2 comments:

I will bet that few folks saw this coming -- fresh off a fairly impressive win against incumbent State Representative Kent Gaffney (who, as you all know, was appointed to fill in after the untimely death of well-respected State Rep. Mark Beaubien last year), David McSweeney now has a new problem -- Team America has confirmed from multiple sources that Mark Beaubien's widow, Dee Beaubien, will mount an independent campaign against McSweeney.

While Dee Beaubien's intent to run is more or less official (TA hears that Ms. Beaubien has been making calls to people in McHenry County), what's not yet official is that Terry Cosgrove and his Personal PAC is behind the move. We will see if this gets confirmed.

I called State Rep. Ed Sullivan, Jr. to see where HRO will be on this, since HRO was squarely behind Gaffney (a former HRO staffer) in the primary campaign. Sullivan is now HRO Chairman. Sullivan told me in no uncertain terms that HRO is 100% behind McSweeney, and that HRO and House GOP Leader Tom Cross will be supporting McSweeney all the way.

If its true that Personal PAC is behind the Beaubein candidacy, I would expect no less, given the enmity between Cosgrove's group and HRO (just look at some of the mailers Personal PAC has sent out against GOP candidates like State Senator Dan Duffy in the past to see why).

This has yet to hit the press, but it will any minute.... Stay tuned for more...

Adding... I wasn't aware of this before, but apparently Dee Beaubien is (was?) on Personal PAC's Board of Directors. This is becoming a bit more clear, now, perhaps... Of course, Mark Beaubien himself took plenty of contributions from Personal PAC over the years.

UPDATED 4/6/12 5:35am: The Daily Herald got hold of Dee Beaubien after we broke this news last night, and she was quite cagey with Mike Riopell, telling him that she was merely "considering" a run. I guess we'll see. Cal Skinner also put up a post last night, with a helpful map if the 52nd District, in case you don't know what the new boundaries are.
Posted by Team America at 6:45 PM 4 comments: